One of the most rewarding roles for the Foundation is to watch local groups, charities and community organisations succeed in bringing their projects and good work to life.

Whether it’s an initial idea or new project they are looking to develop, each group works closely with communities and share the similar aim of making a positive impact on local people and the area.

One such project we’ve followed with great interest is the Three Harbours Association’s Cullen Sea School.  Following the opening of its newly refurbished facility for small boat building, sailing and various water sports at Cullen harbour in 2015, the group was keen to invest in and build its own St Ayles Skiff.

After a visit to the group and its facility last year, it was clear that this is a truly creative and community led project. We awarded a donation to purchase the tools to build their own skiff. 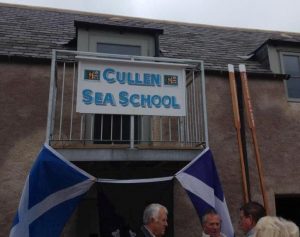 After much effort by the group’s boat-builders, the St Ayles Skiff was officially launched and named – Mairi – at a special ceremony at Cullen harbour. It was fantastic to see so many members from the local community join the festivities and watch the skiff being launched into the water for the first time.

This is a great addition to the Cullen Sea School and something that can be used and enjoyed throughout the summer months by people of all ages.